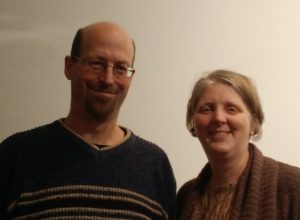 Kendall and Charleen Jongejan Harder have been sharing one full-time position as co-pastors of North Leamington United Mennonite Church since May 2018. They come to Leamington with ten years’ experience as co-pastors of Valleyview Mennonite Church in London. They both received their MDiv from AMBS (now Anabaptist Mennonite Biblical Seminary) in Elkhart, IN.  Charleen brings the name “Jongejan” to the mix, coming from a Dutch background (Jongejan means “young John”, and is pronounced roughly Young-Ah-Yun). She was born and raised in London and Niagara. Prior to becoming a pastor, she worked with Mennonite Voluntary Service in St. Paul, MN, and at the Yonge Street Mission in Toronto, ON. She also has lots of experience with greenhouses – mostly flowers in the Niagara area.

Kendall was born in Goshen IN, but was raised in Edmonton, AB. He studied medieval history at the University of Toronto and served two terms with MCC (Mennonite Central Committee) – one in Manitoba, one in Cairo, Egypt. He taught ESL at the Mennonite New Life Centre in Toronto for five years. Together, they have two curious and creative children, Tobias and Mattea, and one dog Ruby. They enjoy playing games, camping, canoeing, excellent read-aloud books, and exploring the natural highlights of the Leamington region. They are always excited about discovering what God is doing and where God is at work. Whether through pastoral care and spiritual direction, worship, committee work or in the community, they love to find the ways the Spirit is moving in expected and unexpected ways. They are both passionate about the ways we are formed in faith at all ages.

When you call or visit the church on weekdays, you’ll find Susan in the office tending to the daily secretarial details as she has since 2005. Susan, a life-long resident of Essex County, is an active participant at North Leamington. In her spare time she enjoys gardening, reading and spending time with her family.